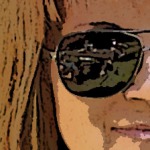 I was born in the Melbourne suburb of Oakleigh and have lived in Gippsland since 1990.

I work primarily with acrylics and I often incorporate pastel, charcoal and collage to create paintings which are colourful, lively and rich in texture. I am inspired by my own experiences and observations both past and present and, although I live in the country, I am frequently drawn back to the city for inspiration and to explore the many faces of Melbourne’s urban environment. The streets of Melbourne provide endless source material for me.

Some of my favourite subjects include railway stations, dilapidated buildings, pubs, cafés and other structures; some are well known icons but others that are not so familiar are just as interesting to me. I am very passionate about the local music scene and this is a recurring theme in my work. I also enjoy painting portraits, abstracts and still life.

I have had a number of solo and group exhibitions in Victoria and interstate and I have a Certificate 1V in Visual Arts and Diploma of Arts with credits and distinctions in painting and drawing.

Last year I collaborated with Kim Volkman on his autobiography “The Devil Won’t Take Charity” which I edited and self-published. The book was launched at Robarta in St Kilda in September 2017. In 2019 I again collaborated with Kim to publish his follow-up book, “For Those That Dance With The Skeleton – a book of short stories” also launched at Robarta.

2019 also saw the release of my own book entitled “Blues Portrait – A profile of the Australian blues scene”. Featuring 46 musicians and foreword by Max Crawdaddy. The book was launched at The Rainbow Hotel, Fitzroy on Nov 10, 2019.

This site uses Akismet to reduce spam. Learn how your comment data is processed.